The tank sticker for my 1970 C3 was discovered when I had the car taken apart during a frame-off restoration. When I first heard the news of the discovery I was thrilled at the possibility of tracking down the origins of my car, but my heart sank when I saw what 33 years of grime and decay had done to it. Not willing to declare defeat my wife and I decided we were going to do our best to get whatever information we could from this black greasy lump of paper.

The first thing Dale did was to take a letter opener and slowly unfold the document. The decay was so bad that one third of the lower right corner tore away from the rest of the document. Next Dale began to brush off as much dirt and grime as possible with an artist's fine bristle paint brush. This proved to be very effective. Much of the bold black in printed at the top of the document began to show through. However the part of the sticker that lists the options and date of assembly was still illegible. It was at this point that I resorted to new technology.

Using a digital video camera with infrared night-shot capabilities was the only thing that would work. Because of the infrared light's ability to penetrate the grease and oils I was able to see through the grime to the text that lay underneath. It was surprising how the text began to jump out. Dale quickly wrote down the codes and we compared them with what we found in a restoration manual. Turns out the infrared camera worked great. In fact it is a little trick that Police Departments use when they try to read fire or age damaged documents. If you are restoring your car and find a tank sticker that is filthy and old I suggest trying the steps that Dale and I did in order to read it. Pictures of the results are below. From all I have read this is the gentlest way to get the info off the sticker.

Good luck and have fun. 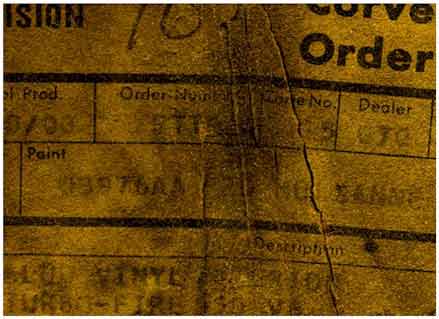 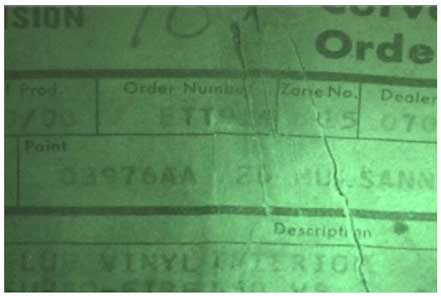 Bugs and Zaino
C5 Modifications To Avoid
The Window Up and Down Thingy
Tank Sticker Forensics
Why NGCA?